This week we’re super excited to be bringing you our very first drag king feature as part of our Cycle 5 Queen of the Week series! We’re bringing you the amazing talents of Landon Cider, who is out to prove that kings can reign as fiercely as queens, so long as they put in the work!

Landon hails from California, and got his start performing on stages in theater. He performed in theater throughout all of his school days and even well into college. While the love of theater took a firm hold of him, his involvement in theater came to a sudden halt after the passing of his mother, a single parent, who was taken after a long and hard battle with cancer. After his mother passed, Landon had to take a hiatus from performing in theatrical productions, focusing instead on the larger things in life such as making rent payments and putting food on the table.

Landon eventually re-emerged into the social scene of drag performances as a spectator at drag shows, seeing the amazing talents of Southern California’s queens. It was at the Starlette Revue in his then hometown of Long Beach, California, where Landon first fell in love with the artform of drag. Yet another unexpected turn of fates happened, though, when Landon himself battled oral cancer. While he was making his recovery, he thought long and hard about what he wanted to do when he was well, fantasized about what he’d do, and decided it was time to get back up on the stage. His first performance as Landon was also his big come-back after beating cancer, and he had the time of his life! He was hooked from then onward.

While the name Landon Cider is clearly a tongue-in-cheek name with some fun and frisky connotations, it’s also reflective of the idea that Landon comes from within the spirit of woman with whom he shares a body. His performances are highly theatrical, as one would expect of someone with such a heavy theater background. The character transformation is fully embodied and enhanced further with the theatrical costuming and make-up that Landon uses. While Landon is a character in and of himself, he also performs as a number of other characters, too. His cast of characters includes (but is certainly not limited to): Pitbull, Rob Zombie, Adam Lambert, Tim McGraw, Beetlejuice, Ricky Ricardo, Jesus Christ, Burt Reynolds, Peter Pan, Frankenstein, the Magic Mirror from Snow White, Freddy Krueger, Chucky from Childsplay, Ron Burgundy from Anchorman, Cupid, Satan, and more! Check him performing as several different drag characters in his RuPaul’s Drag Race Season 6 audition video below:

When we asked Landon what his goals were for his artwork, he put it very simply and very nobly. He says his goal is “to be on a stage or platform large enough to have the vast drag community understand that Kings can deserve to be held in the same respect as Queens.” He then went on to explain a little further that “All too often I hear [people say] ‘kings don’t work as hard’ or ‘it’s easier for a female to be male than a male to be female’ without having done research to learn otherwise.”

It’s certainly more than true that when it comes to working hard, this king sure knows the ropes. When we asked him to walk us through a week in his life, he broke it down for us as follows:

Let’s start with the beginning of my work-week shall we?
Wednesday: I try to get up early (8:30/9ish), and get to work by catching up on e-mails, then designing/working on/finishing up costumes. I work till it’s time to pack an prep for whichever show I have that night (usually Hamburger Mary’s, or hosting my monthly King show “Snatches not Lashes” in Orange County on the 4th Wednesday of the month)

Thursday: Despite a late Wednesday night, I get up early, repack my drag, and head to LA where I put in a full day at the sewing studio where I work for Sharpe Suiting. We make bespoke suits for our local queer community, and I’m learning how to sew/tailer/alter the suits under my mentor, a full time seamstress for a major label in Hollywood. From there I head straight to the whichever venue I’m performing in that night (usually something in either West Hollywood, or Riverside)
Friday: Early day again, as it’s pretty much the same as Thursday, except now you throw Long Beach into the rotation of cities I perform that night. 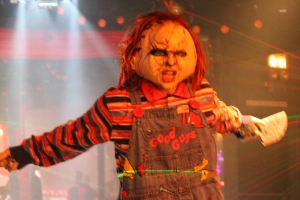 Saturday: I’m becoming more and more blessed with travel gigs so I’m either jumping on a plane, catching up with our team at a Sharpe Suiting meeting, or cramming last minute costume details for my show that night (I host a monthly King show in Long Beach the 2nd Saturday of every month called “King Explosion,” where a lot of my characters make their debut). If I’m not hosting there, I’m  performing in West Hollywood or Riverside. 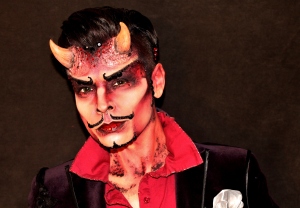 Sunday: Up and at ’em early again for Sunday Brunch with “The Brunchettes”, where we have shows in 3 locations, so I bounce from venue to venue, hosting a lot of the time. Then I head over to my second drag show of the evening (I host a once a month King show the 2nd Sunday of every month in Riverside called “Estrotosterone”) or I’m in Palm Springs or Long Beach.

Although he cited that his Mondays and Tuesdays are generally spent with his fiancé or sleeping, he did mention that he often has performances on Monday nights with “Showgirls” in West Hollywood. It’s through his work at the costume shop and his dedication to improving his skills in his make-up every day that he has learned to create such amazing looks. Check out some of his gag-worthy characters and looks below: 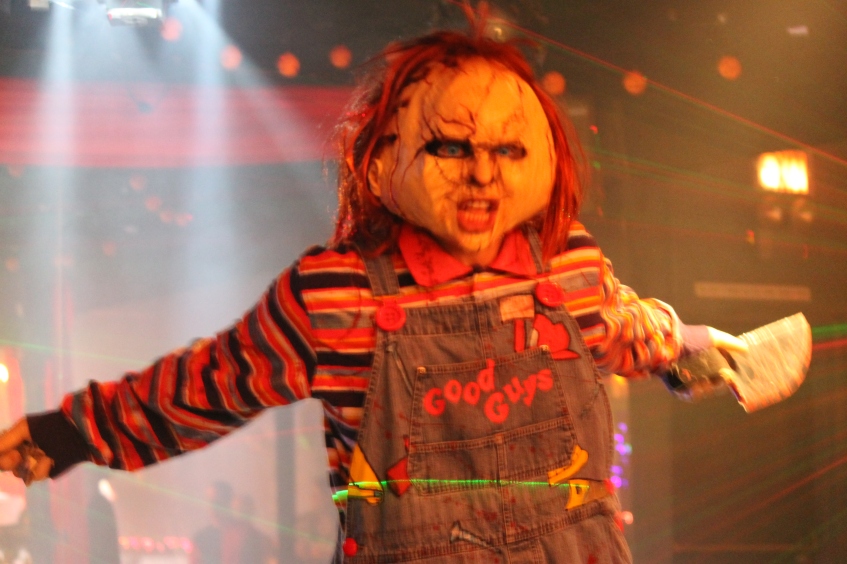 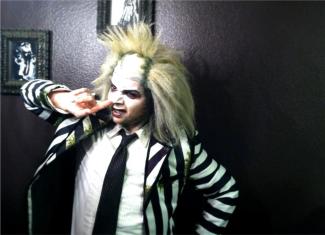 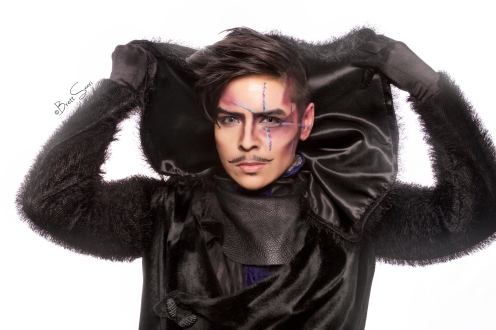 It seems that Landon is working hard toward ending the myth that drag kings are less deserving of respect or less fabulous than drag queens. He’s certainly put in the work, and over the past few years of his performance, his name has soared in the conversations of drag fans. His love of theatrics helps him to create some truly captivating performances. He also draws most of his inspiration for his drag from theater, with the ability to create a whole different character that transcends the person he is. With his five minutes onstage as a whole different person, he tries to entertain the audiences in a way that will resonate with them. As he puts it: “Hearing from someone after a show say that I ‘made their day’, is always amazing. What performer doesn’t like to make people smile, or laugh, or [leave them] stunned in wonder?!”
We certainly live for this king, and we can’t wait to see his career skyrocket. We know that big things are in store for Landon Cider, and we know that as he grows, so will the visibility and fandom of drag kings everywhere. We wish him the best of luck with his endeavor to go onward and upward as a king, performer, and a spokesman for the drag king community everywhere!
Check out some more of Landon’s performances below:
(Warning: this first one is probably NSFW – unless you work in a really open-minded office!)

One of Landon’s most recently developed character performances is his number as Rob Zombie. Check it out below: